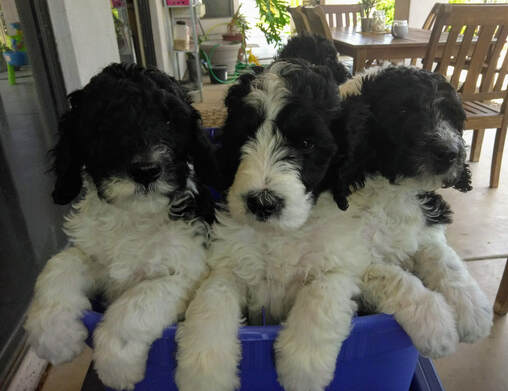 What is a English Doodle?

An English Doodle is a purposeful cross between a Poodle and a English Setter. Doodles of all sorts have become popular since Goldendoodles were first bred in North America in the mid 1990's to develop a larger version of the popular Cockapoo which was a cross between a Cocker Spaniel and Poodle. Goldendoodles quickly became popular due to their fun loving dispositions, athletic ability, and low shedding tendencies. They are a "Hybrid", not a "Purebred", as the repeated breeding of first generation doodles will not produce puppies who look like their parents or have consistent traits. English Doodles are also not a "Mutt" which is a accidental breeding between two separate breeds not intended to be bred. Some might wonder why not buy a purebred non-shedding dog? Doodles exhibit what is called "Hybrid Vigor". This describes the scientific observation of superior qualities displayed in the offspring of two genetically different animals. As a result a WELL AND PURPOSEFUL bred doodle will display very few if any health conditions or genetic concerns which may be present in purebreds. We pursued the development of English Doodles because of our prior experience and love for English Setters. English Setters are known to be extremely gentle family dogs with beautiful hair colors that come in tri-coloring, black and white, and red and white. English Setters are known for very few genetic health conditions which is unusual within AKC purebred dogs. By crossing a English Setter to a Poodle, the English Doodle is a gentle and playful family companion who sheds minimally and tends to be less energetic then their purebred poodle counterparts.
The expected life span of a English Doodle can range from 10 to 15 years.
What is a English Setter?
"The English Setter is an intensely friendly and good-natured breed of dog whose mellow temperament makes it an excellent family pet. The English Setter is one of the oldest breeds of gun dog, with a history that traces back to the 14th century. It was developed over hundreds of years from spaniel stock. English Setters are one of the most suitable breeds to have around children. The mellow temperament and loving nature of English Setters mean they do very well with children. If the temperament is anything other than outgoing, sweet, and mellow, it is not correct for the breed. One would not hesitate to leave an English Setter alone with a baby." A specific breeding strain within English Setters is the Llewellin line, who are known for their keen intelligence, calmer temperament and preference to stay close to their owner. Among purebred dogs, English Setters are some of the healthiest with few genetic diseases being prone to the breed.

For More Information: https://www.esaa.com/BreedInfo/BreedFAQ.html
Pictured below is Kari and Tony's first English Setter "Spring" owned as a newlyweds in Minnesota.
​ 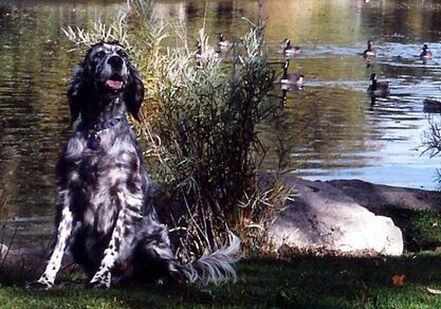 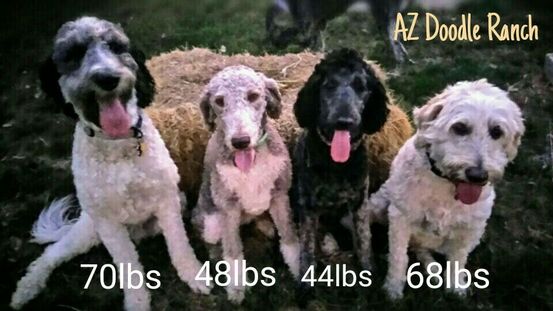 Personality:
English Doodles are often described by their owners as kind and playful dogs who enjoy most being with people. We have found that when in the home our doodles present with a calm personality and prefer staying close to the family.  When outside however, the English Doodle is playful and energetic, often displaying pointing characteristics from their English Setters descendants. English Doodles can be very athletic and will enjoy taking walks, hiking, and swimming. Because one parent line is from a water retrieving breed most English Doodles love to play in the water. They are also very intelligent dogs who learn quickly and respond well to obedience training. Poodles are listed in the top 5 most intelligent dog breeds and English Setters listed as one of the most gentle family companions you can own. More and more doodles of different types are being trained as therapy and service dogs.

Hair and Grooming:
Our F1b English Doodle's hair will range from curly to very curly. Because they are a cross breed there can be some variability in hair type. Most English Doodles are very low shedding dogs however this, as well as how hypoallergenic they are, depends on the hair quality of the specific dog. They do require regular brushing to reduce matting, frequent washing (as they love to roll around outside), hair cuts or trims to keep their hair short in the hotter months. Because they grow a thick coat, which can be cut, they are adaptable to different climates.

Full Grown Size:
Our current F1b English Doodles reach Standard to Royal sizing. This means will get between 55-75 lbs depending on gender and genetics. They are taller and leaner boned then a first generation Goldendoodle or Labradoodle. For comparison please review the typical weights of the following purebred dogs:

Additionally, more goes into the "feeling" of the size of your dog than weight. You must also take into consideration the height of the dog and the bone structure. A 23 inch tall 70 lb male F1 Labradoodle is going to have big bones and a strong compact body compared to a 27 inch F1b Englishdoodle also weighing 70 lbs. Below is a picture of four of our dogs. Odin, our F1 English Doodle stud dog (on the left) is tall and thin boned and light on his feet like a Setter. He weighs 70 lbs. Compare him to our shortest dog on the right, Athena our retired 10 year old F1 Goldendoodle who weights 68 lbs, she is thick muscled and heavy boned.


​​Hair Color:
Hair color genetics in canines is a complicated subject. There are a wealth of color and marking variations with some being dominant and others recessive. For example the hair color B black is dominant in canines over b brown (liver), thus both parent dogs do not need to carry the color gene B for the puppies to obtain the dominant Black color. Parti coloring, a description used specifically for poodles that have a base color of white and a second color in patches on the body, is a recessive trait. Both parents must carry the gene for it to be passed onto the puppies. In English Setters however, the small spots unique to this breed are referred to as "Belton" and this marking is dominant but muted when crossing a English Setter with a non-spotted dog of a different breed. Since AKC sets standards for coat coloring and markings for purebred dogs, what is considered preferred for one breed is not preferred for another. When it comes to doodles, we care more about health, temperament and beauty than color standards. The most common coat colors seen in F1 Goldendoodles are creme and black, followed by recessive apricots, reds, and browns. The coat color will be highly influenced by the dominant color of the poodle parent. With multi-generation English Doodles it is possible to achieve even greater variation in coat coloring as well as markings. We currently are producing black and white parti colored English Doodles, with plans in the works for a future litter of solid puppies coming in Sable, Brindle or Phantom Tri-coloring
​
What are the different generations of Doodles?
Now that many types of doodles have been around for awhile, breeders have experimented with different generations and back crosses of doodles. Variations in size have also been developed.
The simplest explanation is:
F1: First generation doodle from crossing a Golden Retriever, Labrador, English Setter, Sheepdog ect to Standard Poodle.
Wavy to curly hair which is very light to non-shedding. They are typically successful in families with
mild to moderate allergies.
F1b: A backcross pup from crossing a F1 doodle back to a Standard Poodle.
The resulting dog is approximately 3/4 Poodle and 1/4 other parent breed. They have curly to very curly
hair which is very light to non-shedding. They are typically successful in families with moderate to severe allergies
(A visit and T-shirt test is always suggested if allergies are a concern).
F2: Second generation doodle resulting from breeding a F1 doodle to another F1 doodle. The resulting puppies will display a higher            variability in coat type and appearance with some looking very much like the non-poodle parent. They are not
recommended for families with allergies and will most likely shed.
F2b: A second generation backcross pup resulting from crossing a F1 doodle to a F1b doodle. These puppies tend to display the                characteristics and hair type similar to the F1b and can usually be placed with families with moderate to severe allergies. There          may be some variability however in coat with wavy pups who are appropriate for mild allergies.
F3:  A multigeneration resulting from crossing a F1b to a F1b, the resulting coat is similar to that of a F2b
with variation in the litter from wavy to very curly puppies.
For more in depth descriptions visit http://goldendoodles.com/faqs/generations.htm

What is a Mini Goldendoodle?: These dogs are developed by artificially inseminating a F1 Goldendoodle with a
small sized poodle. The resulting puppies will be smaller but still not mini sized. Therefore a third generation
can be developed by crossing one of those F1b small sized Goldendoodles back to another small sized F1b or other
generation of Goldendoodle. The traits of these puppies may vary by generation and genetics. Another method is
to continuously breed down in size through generations. If purchasing a "mini" doodle it is very important to ask your
breeder how the puppies were achieved and what generation they are, specifically what percentage of poodle versus
​       golden retriever or other parent dog. There truly is no such a thing as a "micro" Goldendoodle, they will be primarily poodle. 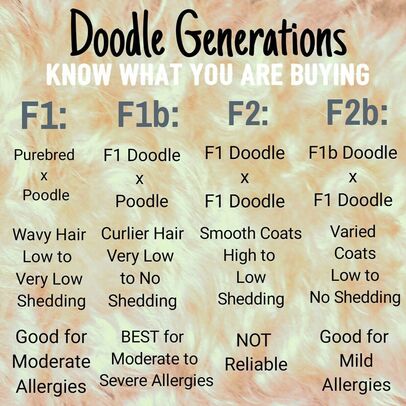